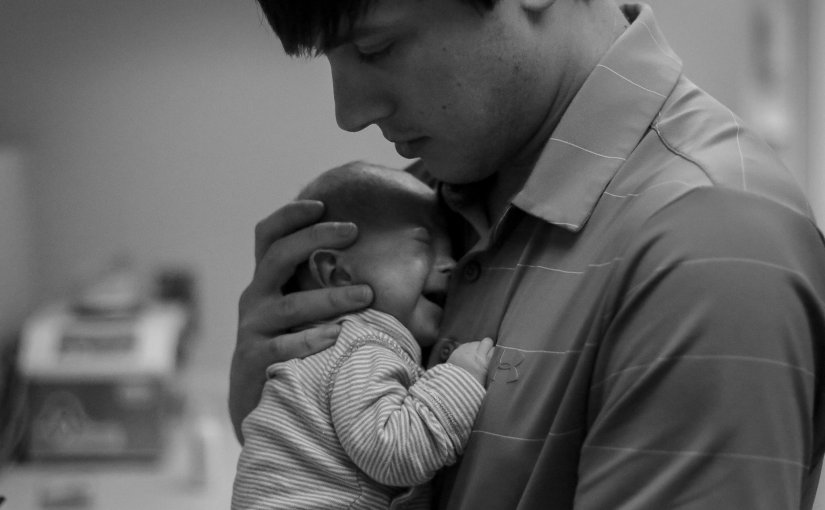 Four Days. That’s how long we made it this time. Four measly days. I couldn’t manage to make it through one work week without having to take Evan to the ER. Where’s my Mom-of-the-Year trophy?

This time we went to the ER closest to our house and waited on the pediatric transport team to come get him and take him to Roanoke. I looked at Alex, “We need to move. We need to move now.” Evan wasn’t breathing well again, and his Owlet sock had alarmed a bunch of times that day. I knew the drill this time. I packed everything we would need, and we headed out. Alex followed the ambulance to Roanoke and met us up in Evan’s room.

He had a little crib waiting in there for him. I could have cried. There are two kinds of cribs up in PEDS. The little ones like they have in the NICU and these big clunky things for more like toddlers. They saw Evan’s name as the incoming patient and remembered that we preferred the little crib. (We love you, Andie.) When you are spending most of your days with your kid in the hospital, these simple gestures mean everything.

This time was much better. We knew how the PEDS floor worked; we had met nurses we loved; we knew the residents and attendings. And even better…they knew us. The nurses knew that Evan kept to a strict feeding and medication schedule. They knew that he needed as little stimulation as possible. And they did everything in their power to adhere to these needs. They were incredible.

Evan’s chest X-ray didn’t look good, but he didn’t have a fever, so it was hard to definitively diagnose pneumonia, but since his oxygen requirements were high, they went ahead and treated for pneumonia. We also got a pulmonology consult this time since it didn’t seem like Evan was going to be able to ween off the oxygen. We discussed home oxygen and monitoring, and the pulmonologist and pediatric attending (who became our regular pediatrician after this admission) agreed that it was necessary to keep Evan safe and out of the hospital. In the meantime, we did something called a pneumogram study that tracks the details of Evan’s breathing over a period of 12-18 hours. It required some charting from me which was actually kind of fun because there is a running joke between me and many nurses that I will do all the work but they have to chart.

Six days after admission, we got everything set up for our home health equipment, and we were ready to go home (again). With Evan’s pulmonary status clearly very sensitive, it was even more important that we keep him in isolation leading up to his hernia surgery that was scheduled for mid-October. If he had any more setbacks, we might have to push the surgery to make sure he was stable enough given his past issues with intubation and anesthesia. We learned how to check Evan’s hernias and reduce them to make sure they didn’t incarcerate.

This is what made the potential of pushing surgery so dangerous. If his hernias incarcerated, he would have to have emergency surgery which would completely negate all of the control factors we were putting in place with his surgical team. We had the same surgeon who did his nissen picked out and his “personal” anesthesiologist to make sure intubation went smoothly. He would be the first case of the day, and he would have a room in the PICU waiting for him after recovery so he could be monitored closely. Evan could NOT get sick before surgery.

So our house would live up to the nickname we had for it, Fort Nort. No one in unless medically necessary. When we would go to appointments, no one was allowed anywhere near him unless it was medically necessary. We would cower in the corners of waiting rooms giving people “the look,” the one that says, “Yes, there IS in fact a very cute baby in this car seat, but NO you may not even think about looking at him with your germs unless you want me to cut you.” The “we” here is really just me, but I will lump Alex in to make myself feel like less of a crazy mama-monster. We were already doing all of these things, but now it was so much more important especially with cold/flu season starting.

We were serious about moving closer to the children’s hospital but hadn’t found anything promising yet. Up until late(ish) September, I hadn’t driven to one of Evan’s appointments without someone else driving my car while I sat in the back if Alex couldn’t take off to come with me. (Alex worked 30 minutes from our house in Roanoke, so to come get us for an appointment, all of which were in Roanoke as well, he would spend two hours just in the car outside of the time it would take to actually have the appointments. Not possible for just taking part of the day off.) There came a day when no one was available to ride with me, so I figured it was time to rip the metaphorical bandaid. Alex would meet me at the doctor’s office.

It was raining. Great start. I ran Evan’s diaper bag and suction machine out to the car. I came back in and got him hooked up to the portable oxygen tank like we always did and put him in his carseat. We went to the car and got hooked in. I waited a minute for his monitor to pick up because I was sure it couldn’t be reading properly: 77%. It wasn’t coming up. I climbed into the backseat to make sure it was on his foot properly and check his color. He was gray. This was real. I quickly suctioned his nose and mouth to clear any secretions that could be causing his airway trouble. No change. I turned up his flow rate to 1 liter per minute when he was normally on a half. No change. I took him out of the carseat and stimulated him because he was limp. He wasn’t getting enough oxygen. I looked at the monitor: 64%. I thought to myself, “This will not be how my son dies. He will not die today. And what’s more, he will not die because I panicked and didn’t handle the situation.” I called our friend, Eric, who is a paramedic and had him talk to me while I worked on getting Evan breathing well again. After what felt like years, I got his sats back into the 90s, but it required him being on 1.5 liters. That was the scariest 35 minutes of my life riding to the doctor’s office. Yup, we still went. I think I pulled over at least once more on the way to give him some stimulation and suction him. I truly believe we were kept safe on that car ride by the hand of God alone. When we finally got there, I pulled him out of that carseat so quickly. That’s what was doing this to him. WE HAD TO MOVE. We could not travel 35-40 minutes 2-3 times a week for appointments or the pediatric ER. It just wasn’t safe.

I told our doctor about what happened on our way there. We suctioned him before leaving and the plan was to have him sit in the carseat for a few minutes before leaving the office to make sure he would be okay. Alex would drive my car back, and I would sit with Evan. We would figure out getting his truck later. Within five minutes, Evan was turning blue again, and his sats were in the 60s. We pulled him out of the carseat and our doctor came back in with two nurses to get his vitals up and his color back. We all gave Evan a stern talking to and explained that this is not the way to try to see his new girlfriends in PEDS. They got him stable, and we headed home mildly terrified but so happy to not have to go back in the hospital. We were seeing the pulmonologist early next week, so we would get a better plan for breathing in the car.

We asked for a car bed for Evan as soon as the doctor walked in. He didn’t even hesitate. They don’t have them in the office, so he sent one of his staff down the street to the hospital to get one from the NICU. Usually that is where families get them. If your child can’t pass the carseat test, you go home in a car bed and retry for a carseat later on at the pulmonologist’s office. Evan, as always, just wanted to do things his own way. So we took an even bigger step backwards with his breathing. But, guess what? It was okay! We got what Evan needed to breathe and travel safely in the car. No more standing in the rain trying to resuscitate my baby all alone. Praise God!

We also made a plan to stay on oxygen support through cold and flu season and reassess Evan’s needs and/or try to ween him off after. There would be no sense in taking him off oxygen during the months when he is most vulnerable to respiratory illness. That would actually be dangerous.

Now that we had everything Evan needed to stay safe and healthy (feeding tube, nasal cannula, pulse oximeter, and car bed) we just had to wait for his impending surgery date. It was a month full of cuddles, reading books, singing songs, learning to SMILE, and loving life with our guy. He still was a terrible sleeper at night, but he made up for it in cuteness.

During this time, Ellie Holcomb released a children’s worship album called Sing: Creation Songs and a children’s book called Who Sang the First Song? We have loved listening to the album and singing along to the sweet truth it proclaims about our God and who we are because of Him. One of my favorite lines in the song, “Sing,” is “God’s song says you’re good and you’re wonderfully made, and I’ll never stop loving you all of my days.” Evan is good because he is His. Evan is wonderfully made in His image. God doesn’t make mistakes. He doesn’t give up on us. He doesn’t stop chasing after us. Ever. God loves my son and fights with us for his health and well-being. He knows that our physical life is temporary, and he is more concerned with our spiritual life: that which is eternal. He is molding and shaping us into parents who can speak boldly to our son about the truth and grace of the gospel REGARDLESS of circumstances. If our faith was only there and we only shouted his goodness when things were easy, we would not have faith at all. It is when times are hard, in trials, in sorrow that we see the fullness and goodness of our God– if we choose to look! It is all about choice. So I will choose praise Him for who He is and for how he shows me His love every day through this precious gift that is Evan.

I am a follower of Christ, wife, mama of a medically complex kiddo, and a coffee enthusiast. I have created this space because I feel called to share our story of hope, heartache, and undeniable grace from our good and beautiful God. This will be a space of unapologetic honesty when it comes to parenting my sweet Evan. At times what I say may offend some, but I will shout our truth loudly because that is what Jesus calls us to. This is our story. This is our everyday. This is our Evan. View all posts by Brooke Norton